The short answer is no. Properly installing a paint protection film on a car is a difficult procedure. To do a clean and proper install takes years of experience. The paint protection film is not cheap. If you mess up a sheet of film, it can cost you a significant amount of money, depending on the size of the area you are trying to protect.

Having said that, there are online companies that sell paint protection DIY vehicle kits. Those kits are designed to be installed more easily by an average person. The DIY vehicle kits are more pliable and precise (but compromised on the thickness). For instance, Xpel sells DIY pre-cut paint protection films on their website. And if you are naturally talented and looking for an adventure, you may be able to install simple and straight areas like a roofline or high impact areas like rocker panels behind the wheels, luggage area, and B or C pillars.

Even installing relatively simple and easy areas by yourself is not recommended. As you would also need to buy the tools it takes to install the film, like spray bottles and squeegees and possibly a PPF knife. 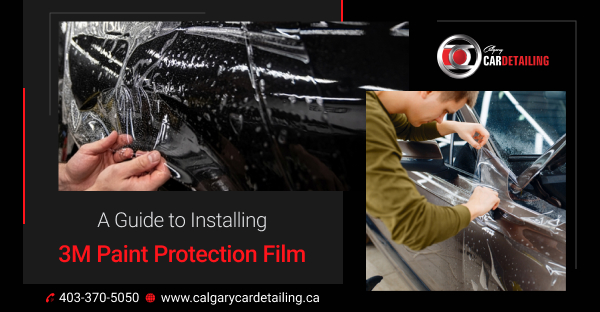 Reasons You Should Never Attempt a DIY PPF Installation

Though in theory, you can install the paint protection film without using a blade (knife) but often time PPF film is extended just a tide over the edge which then you might need to slice off. And using a knife on a car is not safe if you do not have the experience. An experienced installer knows how to apply just enough pressure to score the film but not cut through the film and damage the paint. If you decide not to slice the extended film, well then that’s where the dirt gets collected over time and film starts to peel off and the installation does not look clean. There is a saying in the paint protection film community “There are installers who use knives and there are installers who use knives but don’t admit to it.”

Another part of installing the paint protection film is to heat the edges with a heat gun so the film locks in place and does not lift overtime. So, consider all of these things before buying DIY kits online. But if you still want to do it, I would recommend installing the film on straight and easy-to-install areas. On Xpel’s website DIY kits actually tell you their difficulty ratings. So, for a beginner choose the least difficult one to see how it goes.

The issue arises when you try to install the film on curved areas like bumpers, headlights, fenders, door cups and deep valleys in the hood, etc. The paint protection film has a personality of how it behaves and it takes a while to understand. Whether the brand you are using is 3M paint protection film or Xpel paint protection film, it takes a while to get a hang of it. The wastage can end up being a significant amount and easily overrun the cost of PPF in Calgary by a professional installer. An experienced installer knows where to anchor the film and how much stretch it requires, how to avoid creating fingers. Some parts of the car can also be difficult for experienced installers to properly do a clean and seamless install, but when they have done the same year, make and model the vehicle a few times they then understand it better and install it more efficiently. After all, the point of installing the paint protection film is to have unnoticeable protection.

Also, contaminants in the air like dust and lint can present a challenge. Even the cleanest environment can have contaminants. Moving a big piece of the sheet through the air can collect something. Even particle-like dust, hair, or lint is visible through the film. Most installation shops are designed to be clean and contaminant free. Calgary Car Detailing has an air purifier system that continuously cleans the air which helps eliminate fine particles in the air for a perfect 3M paint protection film install.

So if you ever want to install the DIY film make sure you do it indoors in a clean environment and try to wear somewhat lint-free clothes. Putting on a fuzzy sweater before an install is definitely not recommended. Another point to take into consideration before you decide to install the paint protection film yourself is that the kits you buy online cost almost just as much as having the film installed by a reputable PPF shop like Calgary Car Detailing. Why is that? Well, paint protection film shops buy the film in bulk at a relatively lower rate. Also, any reputable paint protection film business has an in-house plotter and software to cut their own pre-cuts hence adding to their savings and passing those savings on to customers.

Installing PPF is a high-skill venture. A do-it-yourself paint protection film installed on your car is possible, with aid of pre-cut films. However, the cost and wasted film by an amateur installer can easily overrun the cost of an authorized 3M paint protection film installer in Calgary. Besides many film manufacturers do not provide a warranty on self-installs. 3M offers a wonderful 10-years warranty on their pro guard self-healing paint protection film given that it is installed by an authorized PPF installer like Calgary Car Detailing. Still not convinced.? Run a thought experiment of perfectly installing a screen protector on your phone which behaves significantly easier than PPF film. A single bubble or dirt particle ruins the screen protector. Now consider the curves of the bumper and auto body, the huge area covered, stretching the film, constantly spraying soap so the adhesive does not get cured. Once the adhesive has built its final strength any imperfection thereafter requires the removal of 3M paint protection film by a professional technician, which can cost quite a bit. All those factors make it a tough DIY project.

Unlike Calgary Car Detailing many PPF Calgary facilities do not remove PPF film unless it is installed by them. If you need a quote for safely removing PPF film, please call 403-370-5050.